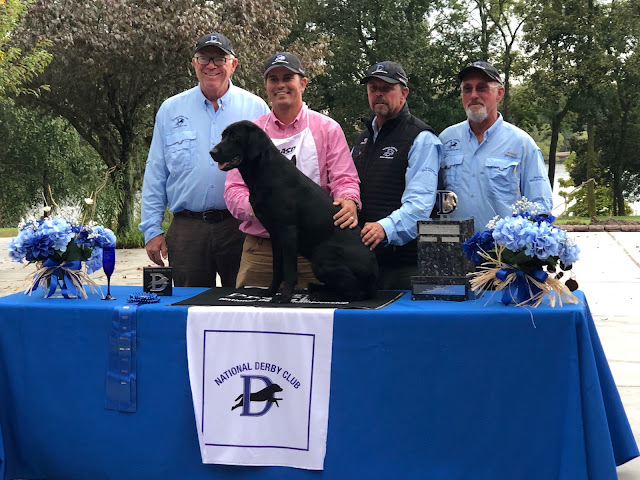 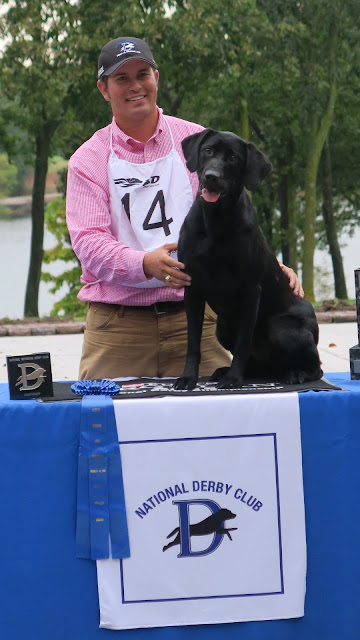 And The Finalists Are... 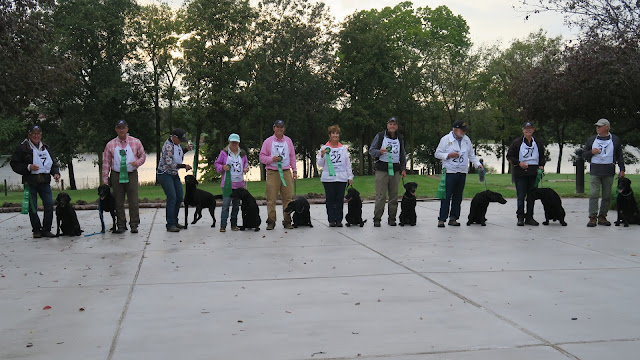 Series Nine – Water Double. The marshal said for all 12 dogs to at the field for 8:45 am with the test dogs being called to the line at that time. However, Mother Nature decided not to go along with the plan. We were under a rain delay until after 11:00 am when test dog Doc and Judy came to the line. After about another 30 minute delay after the test dogs ran, our first running dog #10 Johnny came to the line at 11:50 am. He received the only no bird, (the only other no bird came to the second to last running dog #7 Rain). The next dog #13 Songbird came to the line at 11:51 am. One dog #30 was picked up. We were down to our last two dogs #7 Rain and #8 Grit when the judges called for everybody to get out of the field at 12:52 pm. Then at 1:33 pm the last two dogs were called to come to the line. The ninth series was in the books at 1:45 pm. In the five hours we spent at the ninth series test sight, we had a total of 63 minutes of competing dogs, which means it took each dog 5.25 minute to complete their test. Two dogs were dropped #30 and 32. Ten dogs were going on to the 10th and final series.

This test took one hour and seventeen minutes to complete and an average of 7.3 minute for each of our 10 Finalists to complete their final test of the 2019 National Retriever Derby Club Championship.
Posted by Retriever News Team at 4:23 PM
Email ThisBlogThis!Share to TwitterShare to FacebookShare to Pinterest
Labels: 10th, 9th, recap

That is it!!! The 10th Series and the 2019 National Retriever Derby Club Championship is in the books at 4:14 pm. Now we wait....
Posted by Retriever News Team at 4:21 PM
Email ThisBlogThis!Share to TwitterShare to FacebookShare to Pinterest
Labels: 10th, completed

Flyer - Willie went down and crossed the terraces. Getting out to the point, he crossed the pond heading left of the fall. He adjusted during his swim but still ended up left under the arc. Getting deep left and behind the guns, he worked it out and got his bird.

Long Left - Going down the terrace in to the first pond swimming to the levee, he got out and went into the third pond. Having a big swim on a good line. He got out and went wide left. having a loop deep and left, he then went right and got his bird. 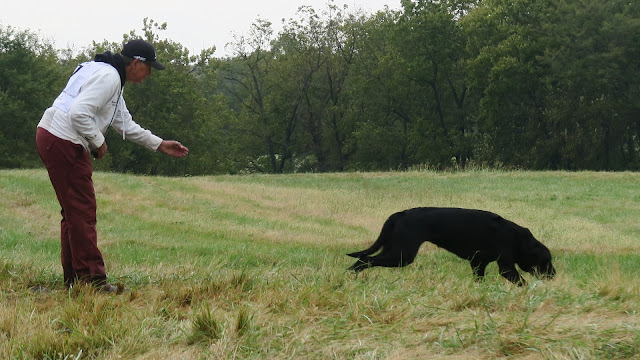 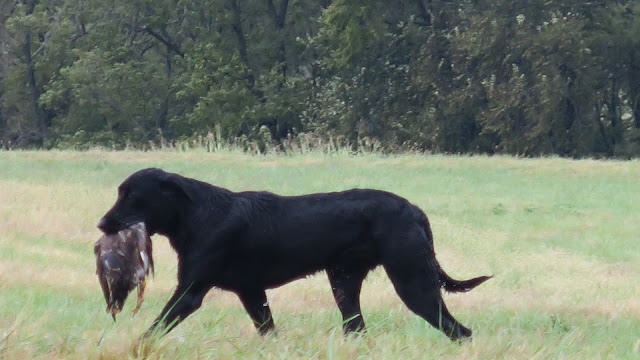 Flyer - J.J. went down the terraces and out onto the point. He swam to the far shore getting out and going in under the arc just left of the fall area. A quick right and he got his bird.

Long Left - Getting down the terraces and into the right side of the first pond, J.J. went over the peninsula and into the second pond. On a good line he went over the levee and into the third pond. Exiting the final pond he went out under the arc and went deep and right. J.J. then turned back left and got his bird. 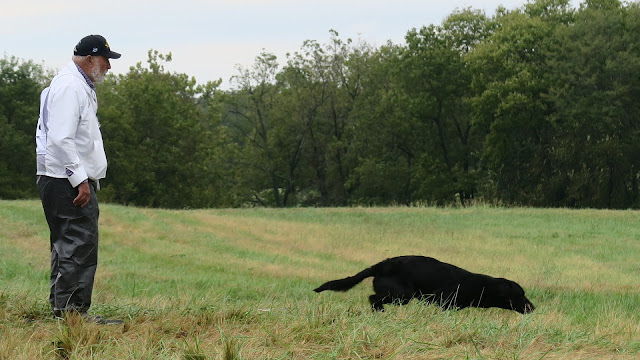 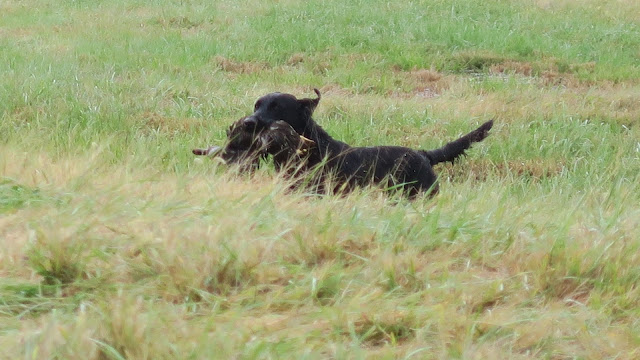 Flyer - Pireaux went out over the point and across the pond. She went up onto the far point. Going out under the arc, she turned back right and got her bird.

Long Left - Getting down the field, Pireaux went into the first pond on a left angle. She crossed the dyke and went into the third pond. Giving a really big swim, she got across the third pond and getting out she went to the fall area. With one quick turn back in she got her bird. 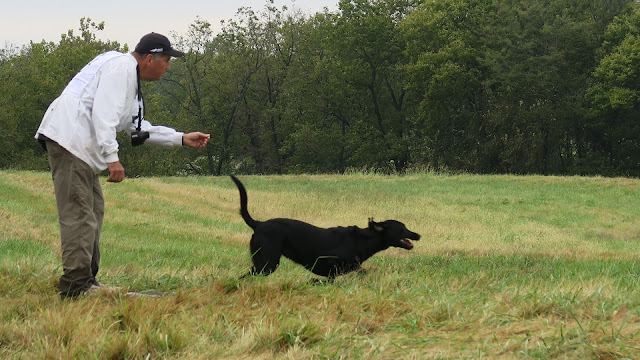 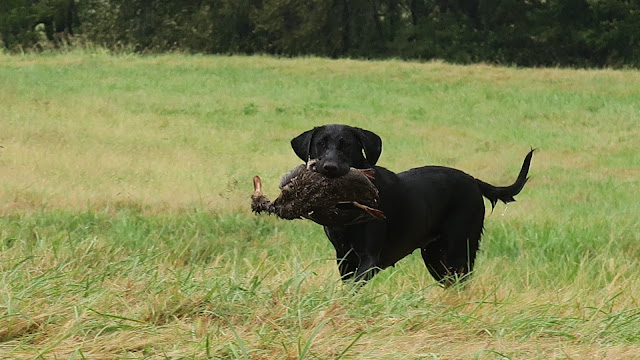 Flyer - Lucy went down the hill and went out to the point. Going through the pond to the far point, she got out and with one turn left she was under the arc. Then another quick right put her on the bird.

Long Left - Going down the field Lucy past the first pond. Getting into the second pond she was on an excellent line. Out and over the levee she went into the third pond. Exiting the last pond Lucy went around the back of the guns and straight to her bird. 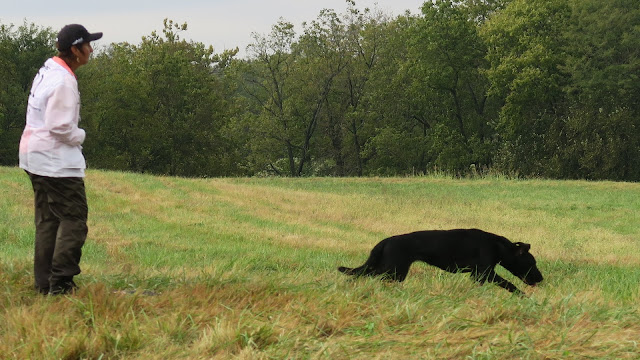 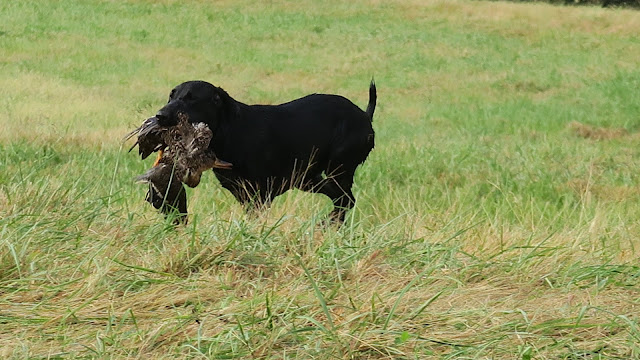 Flyer - Going down the hill and out to the point and then going on to the far point, Mona went straight to her bird.

Long Left - Mona went down the terraced field and past the first pond and almost the second one as well, but she toe nailed through it. Going through the third pond she got out and went straight to her bird. 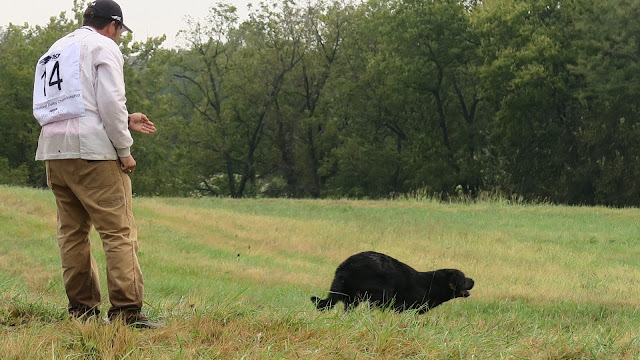 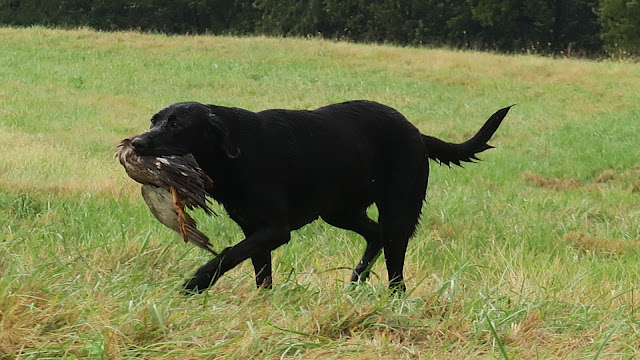 Flyer - Getting out across the field, then out to the point Songbird exited with a flying leap. She cut left on the far shore and then turned right. She quickly worked her way to the bird.

Long Left - Going down the hill Songbird past the first pond. She went over the first peninsula and into the second pond. Going over the levee on a right angle she went into the third piece of water. Getting out and going under the arc, she got deep, but with one turn deep she then came back into the bird. 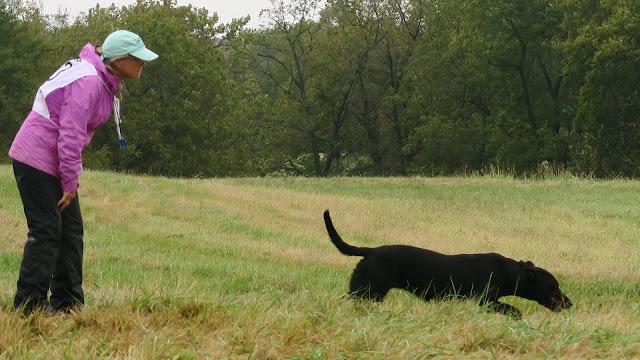 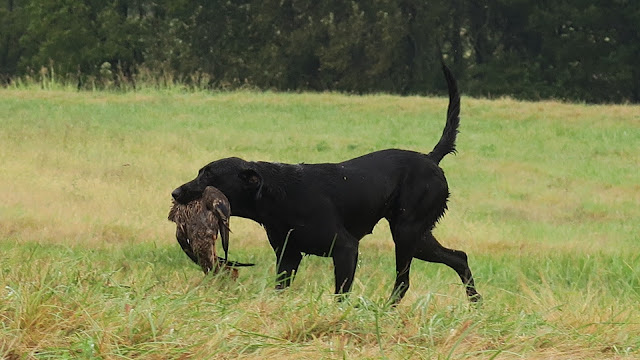 Flyer - Johnny went out to the point and crossed the pond. Getting right of the far point, he went into the field and out to get the bird.

Long Left - Going out across the field, Johnny past the first pond and almost past up the second too. However, he did get in it and swam a short distance, to where he got out and went under the Willows, then went straight across to the mark. 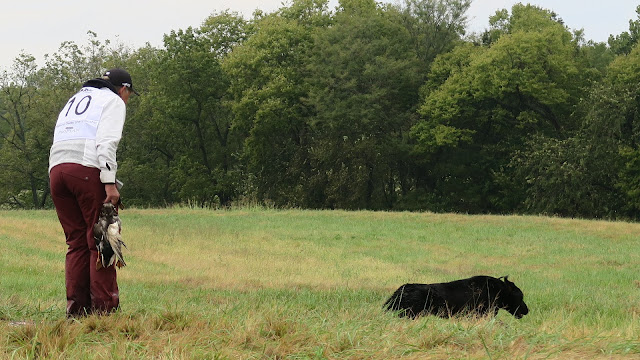 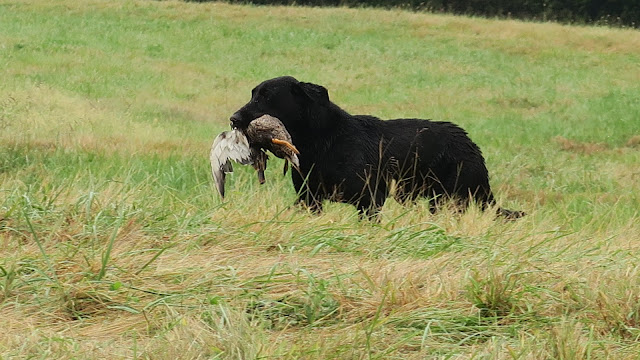 Flyer - Grit went down the field and out to the point and got into the pond. He swam to the area in front of the guns, then came in just left of the bird. He made a quick right and scooped up his bird.

Long Left - Passing the first pond, Grit got into the second one on an excellent angle. Going over the levee he turned right, then got behind the guns when he got out of the water. Grit got deep then took a left to get to the fall area and his bird.

Flyer - Rain crossed the terraces and getting into the pond right of the point. She swam to the right end of the far point, got out and into the field, she went straight to her bird.

Long Left - Going down the field, Rain passed the first pond on the right. She went over the peninsula and into the second pond correct her line for the third pond. Getting out of the last pond she went out to the far area and then got her bird. 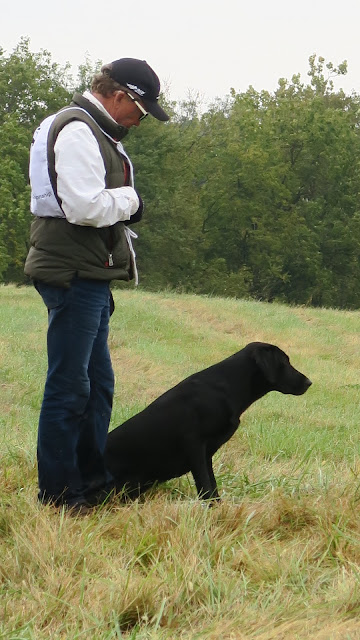 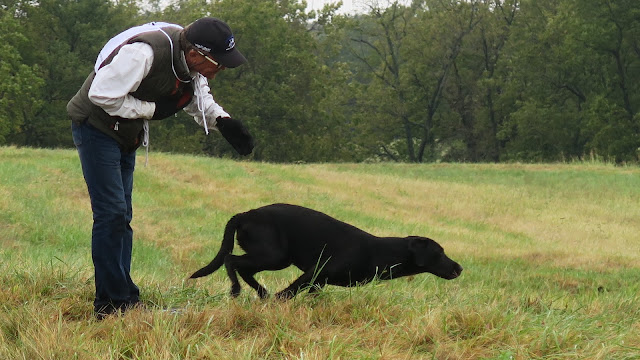 Flyer - Did not see, he was being re-heeled –  Swimming wide left to the area behind the gunners. He had hunt short and deep of the guns. Going wide left behind the guns, get went into the field between the guns and road. He worked his way back to the bird.

Long Left - Going down the terraces he toe nailed the first pond. He went over the peninsula into the second piece of water and on to the third. He got out of the third pond and went straight to the fall area and his bird. 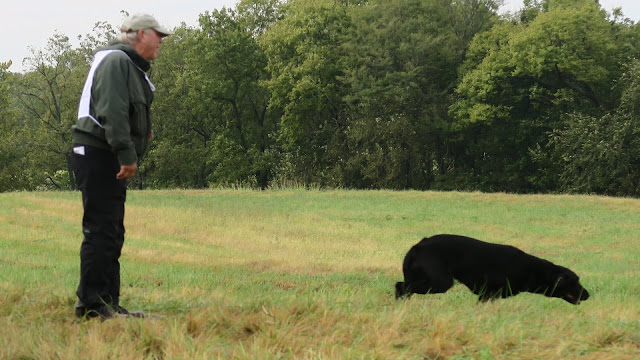 Flyer - Just went down the hill and out on the point then swam to the far shore and went straight to the bird.

Long Left - He went down splashing across the terraces, he did not get into the first pond but went in the second and third ponds. Getting out of the last pond he went straight out to get his bird. 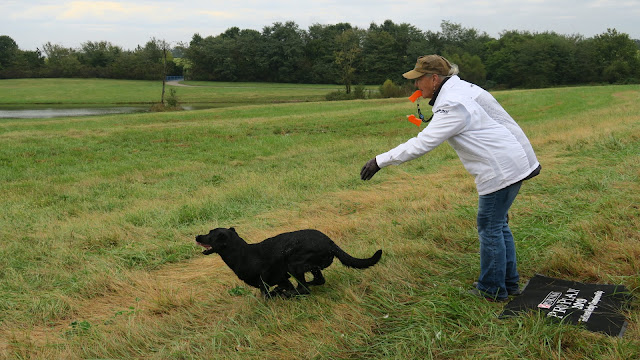 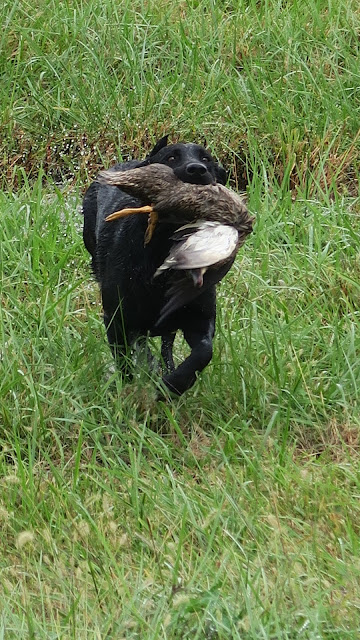 Flyer - Doc angled across the terraces and went straight into the pond. He swam to the base of the far side point and got out to go straight to the fall area and then on to the bird.

Long Left - Going down the terraces Doc past the first pond and got into the second one for a short swim. Going over a levee, he quickly went into the third pond. Getting across this pond he got out and went to the bird. 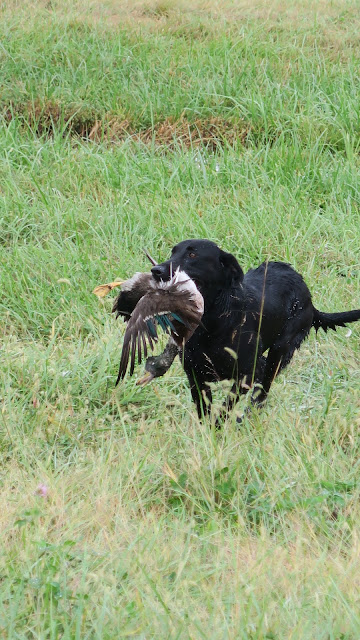 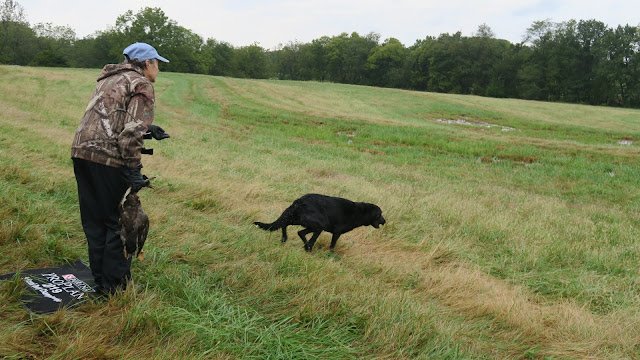 Test 10 is a Water Double with a Flyer. This mat sits up on a terraced hillside looking down on multiple pieces of water. The mat is facing northeast.

Bird One is a hen Mallard thrown to the left landing 306 yards from the mat. The line to this bird is down at least three terraces into three separate pieces of water and over two peninsulas. Then the dog will go through the weed-covered shore line to go out into an open field for their bird.

Bird Two is a Drake flyer. This flyer is shot to the right at 245 yards from the mat. This bird is on the handler's right. The line to this bird takes the dog at a right angle across the terraced field that should take the dog out on a point. They then will have a short swim to get to a second point. The second point juts out towards the first one. 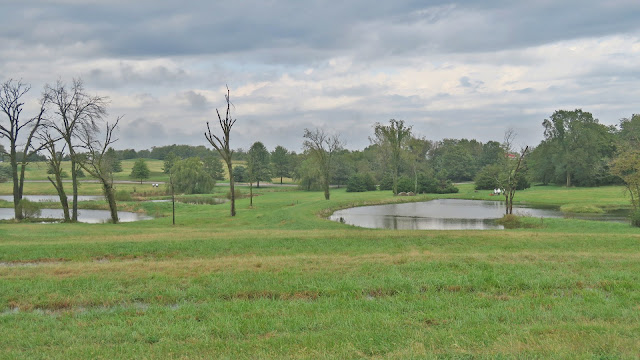 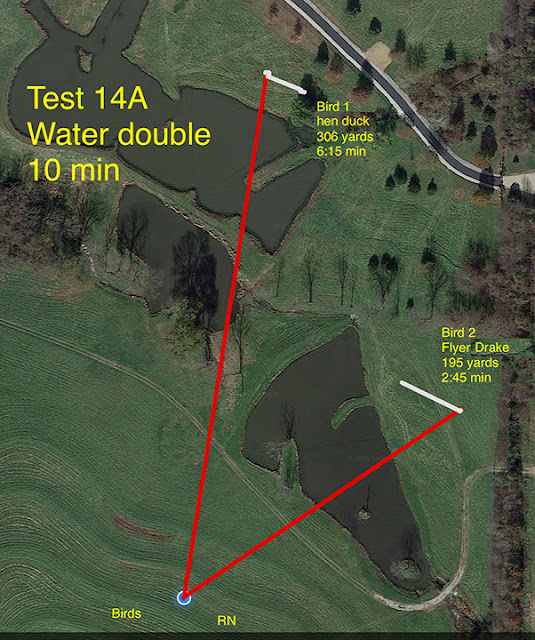 What state or country is our beautiful National Retriever Derby Championship trophy going to travel too next?

Well here are the states and country that our last 10 dogs come from.

What state are you cheering for?
Posted by Retriever News Team at 2:17 PM
Email ThisBlogThis!Share to TwitterShare to FacebookShare to Pinterest
Labels: 10th, trivia

Callbacks to the 10th

9th Series In The Books

After a rain delay in this morning and another one with ONLY two dogs left to run, we got this Ninth Series in the books at 1:45. We had one dog pick up and one with a no bird/re-run.
Posted by Retriever News Team at 1:51 PM
Email ThisBlogThis!Share to TwitterShare to FacebookShare to Pinterest
Labels: 9th, completed

Left Bird - Rain went down the hill and crossed the pond. Going up the hill to the left of the brush, she got just a little deep. Rain then turned right and went straight over to her bird.

Right Bird - Going right of the brush, Rain got down the hill and into the pond on an excellent line to her bird. Nice! 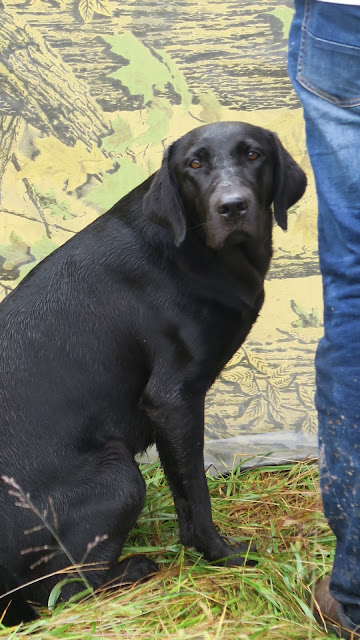 Right Bird - Grit went down the land bridge and up the far hill to get under the arc. He came back with the bird.

Left Bird - Going down the hill, Grit crossed the pond on a right angle. Getting to the top of the hill, he past the guns. Coming back left he got his bird. 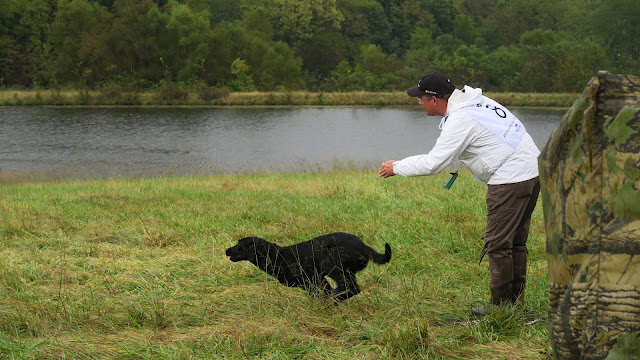 ... to the Official Blog of the 2019 National Derby Championship, October 7-11, 2019 held this year in Sedalia, MO. This year's Blog is brought to you by the Retriever News and our Official Sponsor Purina. Also Sponsored by Ainley Kennels, Mountaintop Custom Kennels, and Master Amateur Retriever Club. We hope you enjoy these multi-daily updates and please come back often!
We encourage visitors to participate in the National Derby discussion located in the comments section of each post. These areas are a great outlet for remote communication and commentary for those unable to attend this year's National Derby. Also, please keep an eye out for trivia, surveys and other interactive activities!
The Retriever News team consists of Tina Styan, Gwen Jones and Regina Henke. Please don't hesitate to share any items of interest or photos that you think the retriever community might be interested in. Send submissions to Tina Styan at: tstyan@theretrievernews.com Subject Line: 2019 NRDC Blog. Thanks in advance and enjoy the coverage...
Removing content from TheRetrieverNews.com site for commercial purposes, resale, reproduction or other uses is to be done only with written permission from Retriever News | Entry Express

Brought to you by: